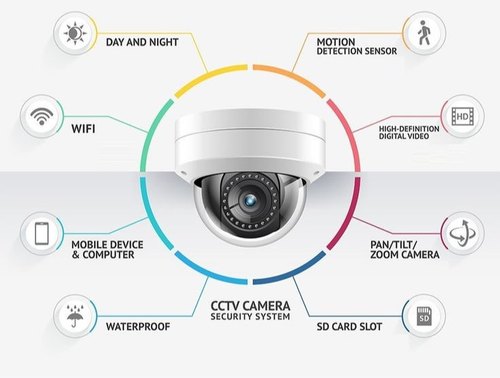 you are trying to protect your home or business, two common systems are used for surveillance, i.e., Analogue CCTV and IP CCTV. Though both the CCTV serves the same purpose, they differ in the technology used to deliver your security requirements.

In this article, we will provide a brief guide on Analogue Vs IP CCTV. The starting point for most people is, understanding the difference between analogue and digital CCTV.

At first, we will see the misconception about both systems. There are certain misconceptions about CCTV cameras, which we will discuss here.

To clear your misconception, we will begin with an overview of both Analogue CCTV and IP CCTV systems.

Analogue CCTV is a traditional version of the surveillance system. Analogue CCTV is like having an eye connected to a recorder, i.e., it only provides visuals, and hence that is analogue sent usually via a coaxial cable known as RT59.

The DVR has standard BNC connectors at the back and an RJ45 connector for a broadband router, allowing you to watch the video coverage on your mobile phone.

The IP surveillance camera is an Internet Protocol camera that transfers real-time compressed digital image data wirelessly through the internet.

Here we will explain the simple way to understand IP cameras and how it differs from analogue cameras. In addition to video recording, think of an IP camera as a brain; it is an eye and a brain. It sends a digital signal back to the recorder. The data is sent in “0” and “1” format, which means the smart information is sent rather than an analogue signal.

The main point where the IP cameras and analogue cameras differ is when you want to extract the data, IP cameras will be useful to you.

You need to plug an IP camera into the NVR (Network Video Recorder). There are RJ45 connectors on the back of the NVR, which you can use on your laptops and computers because that is how your cameras interface with the recorder.

Two main options are available for sorting footage from the IP cameras.

IP cameras possess an SD card slot for a single-camera system where an SD card can be inserted to record footage.

For multiple camera systems, a software program known as Video Management System (VMS) or hardware known as Network Video Recorder (NVR) are used to record and manage the cameras. As IP cameras are digital, users can remotely view footage virtually from anywhere through the internet. Also, they provide a multi-user support option which means multiple users can control the surveillance camera from distinct devices.

What is the difference between Analogue CCTV and IP CCTV?

Herewe will see the main difference between Analogue and IP CCTV.

There are different types of Analogue cameras. They are:

Another benefit that IP cameras provide is a relay connection which you can plug into your barrier to trigger automatically. So, suppose if you go to the airport, the IP camera will capture the number plate as you enter the car park. Then, on your way out, the gate opens automatically, and this is because it extracts the data from the captured image. This is how the IP camera differs mainly from the analogue camera.

So, the final question is which one is beneficial for you, which one should you go for?

I guess the first thing you should consider is for what you are looking for, i.e., home or business.

Now we will proceed further with other requirements.

Seeing your family's safety and keeping your assets protected is the most important thing in this world. This can mitigate a whole lot of unnecessary hassle and inconvenience.

Get a Free Quote fill out the form.

Get A Quote fill out the form.